A Morning with Dave Rudin 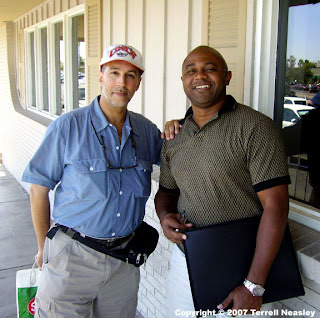 This was indeed a good weekend. I need to give my sincerest thanks to Dave Rudin for making it so. I was pleasantly surprised to get an email from Dave last Sunday informing me he would be in town and asked me to breakfast on Saturday. All week was a build-up to that morning. Don't get me wrong...I am not the sort to idolize celebrities and swoon over any experience to be close to them. I don't think Dave sees himself as a celeb, but he has been one of the photogs who's work and blog postings, (Figures of Grace) I have tracked on nearly a daily basis. I began to identify with his photographs originally because of his dedication to the use of film in a world that is increasingly becoming digital. Also, I can see my work developing closest into what his already is moreso than any other creative work I know. In fact, you can see some of his best work in the premier issue of the NEW MAGAZINE Carrie Leigh's Nude: The Art of Women, that has just been released in the newsstands. So pick up a copy and check it out.

So, as you can imagine, it was a high point in my photographic endeavors to receive such an invitation from someone of his credentials. We spent about 4 hours having breakfast and discussing photo. I tend to have to guard against overwhelming someone with photo-speak. This was not the case with Dave. He gave just as well as he got. Four hours passed as if it was one. I had a goal of wanting to listen more than speaking but Dave didn't let this turn into a monologue where he lectured like a mentor schooling a pupil. He was charming in his mannerisms. He was polite and treated me like a peer. He called again this evening just to wish me well and to expect return visits in the near future.
What did I take away from this experience? First, it was a dramatic outlet which I seldom get. I am not amongst a pool of photog fanatics here in Vegas. There is a big difference between the photography resources and communities in New York and that of Las Vegas. I got to talk photo and get advice from someone who knows the deal. Second, I gained a friend. Thirdly, I got an experience that I won't forget. I can tell you he speaks highly of his friend Dave Levingston. Dave L.'s name was referenced often when it came to advice Dave R. wanted to pass on that did not include his own personal experience or when he wanted to lend more creditablity to his own. I can imagine I'll tend to do the same using Dave R. as my source. I can most respect the fact that Dave took the time to get to know an up and coming photog and admirer and offer some help and inspiration. Anyone can send an email with advice. Dave showed up.
Brought to you by Photo Anthems.com