I Switched to Tamron for My Wide Perspectives

"Adventure may hurt you but monotony will kill you."
~ Unknown

I think that quote is one you can feel me on. Am I right? Who's going crazy in quarantine right now?

During my travel adventures, I can't take everything I own. I have to make choices on what I bring because in the end, it all has to be carried on my back. Weight is one of the largest considerations of my around the world travel.

I cannot say the Tamron 24mm 2.8 is better than the Sigma 20mm 1.4. But I can say that at a quarter of the weight, the difference becomes negligible. Don't misread me. I will not sacrifice quality. If there was a quality drop off that I felt affected my art, that would be a no-go. If the added benefit were not worth it, it would be a no-go.

The Sigma 20mm f/1.4 is an excellent piece of glass. I'd put it up against anything in its class. But the thing is 2 pounds! Two pounds may not sound like a lot, but keep it in your camera bag strapped around your neck all day and then come talk to me again. I carried it and shot with it for almost a year and it served me well. I had no thoughts on switching until my friend Lucy told me about Tamron's new line-up... the 20mm, 24mm, and 35mm, all f/2.8 with macro capabilities. I got an opportunity to stop into Vegas on my way to Vietnam and see this for myself.

I came to Las Vegas to gear up, since I do not expect to be back stateside for a number of years. REI and B&C Camera was the only places I visited and that's when Lucy showed me what the Tamron could do. I held it and could barely feel anything in my hands. I shot with it and could find no fault. I tried to force some chromatic aberration and color fringing into it and could not. And then the price! I think it was $350... you gotta be kidding me! And it still had Auto Focus. You can't get a descent wide-angle Rokinon manual focus lens for that much.

I jumped on the deal and have not looked back. The only temptation I had to resist was getting the 24mm OR the 20mm. I went back and forth initially on which one to get and then Lucy suggested getting both. I so almost did it! But my sensible side told me the focal difference would not be significant enough to justify a 4mm differentiation. I decided on the 24mm since it was still a wide-angle, but it had less distortion (BTW, Photoshop recognizes the lens profile and  automatically corrects for this). I still get significant vignettes on the corners, particularly in low light (and it corrects for that, too!) at f/2.8. I sacrificed a 1.4 for a 2.8. That's two whole friggin' stops. But you know what? That true 1:2 macro capability is real. I'm under 5" on a minimum focusing distance and I can't get that on my Sony 90mm 1:1 macro, (which is in storage).

I can't say I've gotten to really test this thing out under ideal conditions. I got it and left Vegas like, the next day. And since arriving in Vietnam, well there's this thing happening all over the world that has limited my outdoors activities, but I've gotten a few shots with it. I don't have many shots at 100 ISO as most of the images I took were at night or during foggy days.

It can be slow to Auto Focus on certain compositions, but even at night, I got it to lock every single time. When it does have to hunt in low contrast situations, I think it is noisy. The Sony 85mm 1.4 GM is the noisiest lens I've ever owned, but this Tamron is nothing like that. But be aware of it when doing video.

I was surprised as hell to see the front elements retracting inside the barrel when it auto focused. I strongly advise a UV filter on top of it just to ensure you keep dust out of it. Specs say it's moisture resistant and keeps out dust. Get a filter, anyway. It has a plasticy feel to it, which contributes to the light weight... but you can still tell it's durable. I've yet to test it on astro work since I have yet to even see any stars. I'll wrap it up to just say this thing suits me. It's just what I need. If speed becomes an issue, I may look at some other options, but right now, this thing works. Thanks, Lucy! Check out B&C Camera for your photography, video, and all you content creation accessory needs. I love those guys. They have free shipping on all their orders right now. Catch them for some deals!
Brought to you by Photo Anthems.com No comments:

I was identified for possible contact exposure via Coronavirus Case #237 after I arrived at this new hotel. He stayed one night at my last hotel while I was there, but I never interacted with him. Nonetheless, my current hotel and the local government sent me paperwork ordering me to quarantine myself in my room. They send me paperwork to record my temperature twice a day. Today, April 7th is my official last day to do this, but I believe I will volunteer for one additional week. The mandatory shelter in place is still effective until the 15th. I figure it won't do any harm. I am well cared for and have everything I need. And I think it will help make the staff here comfortable being around me.

I'm taking every day one at a time and figuring it out as I go. This obviously won't be the type of trip I counted on. At some point, I'll have to cross over into Cambodia and I hope they have their situation contained. They currently have about 114 cases, but the borders are closed. I'll have to head down that way soon, through central and South Vietnam and over the border. I have't checked into Laos yet, but that may be an even better option. I don't know.

A few people have asked what the weather is like here. It ranges between 65 - 75 degrees Fahrenheit, give or take 5 degrees in either direction. Many days there is a low lying fog over the cityscape. I can leave my windows open during the day to freshen the air and turn the AC off if it's not too hot. The traffic outside is consistent during the day, but it's not blaring traffic with a lot of horns, nor is there much smog or exhaust fumes, despite being on a busy street. I can look down and see some pedestrians, but there is not much on any given day.

Though many people here can speak English it is sometimes a challenge to understand English phrases. It's particularly more difficult on quarantine where I cannot speak face to face with anyone and I don't have the benefit of Google Translate on my cell phone to show them. For instance, it proved difficult to get a lady to understand that I wanted a sandwich with double the meat, not two sandwiches. They call the sandwiches "bread", for some reason. Not sandwich. They had a chicken sandwich. It was hella bread and little meat. So I asked for one sandwich with double the amount of meat. I tried many different iterations of that before it finally clicked.

Another time, I requested my temperature monitoring paperwork which is supposed to be delivered in the morning and afternoon. They were late one afternoon and when I requested it, she thought I was referring to toilet paper. Then she thought I wanted paper for me to WORK on. But, I don't lose patience. I find a different way to say it.

"I'm on quarantine, right?"
"Yes."
"And I need to take my temperature."
"Okay."
"Yes... so I need the paper to record my daily temperature on that I get every morning and afternoon."
"AHHH!! YES! Sorry, we will bring it up to you, right away."

They have all been good to me and have treated me kindly. Even though I don't know the language, I'm still learning a lot about communication. I can easily put myself in their shoes. I've been there. AND they know a ton more of my language despite me knowing ZERO of theirs, despite being in THEIR country, not mine. Respect. 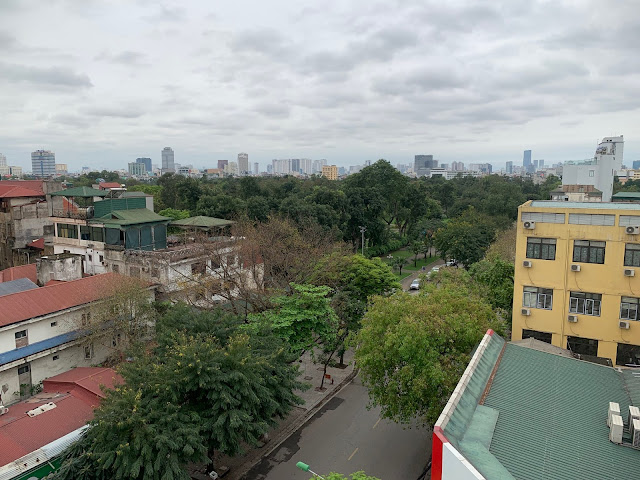