Why You Don't Need to Take a Picture of EVERYTHING!!

"Art is the elimination of the unnecessary."
–Pablo Picasso
There is this one scene in "The Secret Life of Walter Mitty" between actors Sean Penn and Ben Stiller that epitomizes a concept that I think is often forgotten among photographers as well as people just taking pics. Not every memory needs to be captured by a camera. Not every moment needs to be immortalized on a "memory" stick. There are some instances when the camera does more harm than good. To paraphrase Sean Penn's character in the embedded video, "The camera can be a distraction." And that's what I want to talk about a little bit here.

I've had a few moments like this when I chose not to bring my camera on a trip. I actually got vilified mainly because, "I was wasting opportunities..." and "I may never get to return to this place..." and so forth. That's not the way I looked at it. There have been more than one occasion of these instances, but in this particular situation, I wanted to enjoy my time with a friend who wasn't a photographer and I didn't want to spend all my time "needing to get the shot". Otherwise, I would have ended up neglecting the companionship for which I traveled there for in the first place.


Here's another reason you don't need to take a picture of everything. Petapixel.com recently posted on their popular blog an article by the British Psychological Society that they titled, "Simply Snapping a Photo Harms Your Memories of Things, Study Finds". Now their study requires a bit more research, I'm sure. They use a base their finding, per the article, based on a sample size of 50 undergraduate students. 5000 students would have been more convincing, but the findings are nonetheless comparable to my own experiences, albeit not as measurable scientifically.

Put the damn camera down! I've talked about this before. Look around yourself and just enjoy the moment for what it is. At the very least, slow down. Get a few shots and stop. Blasting on rapid fire mode trying to capture everything tends to make you lose the gift of the memory and here are two reasons why this makes sense:

1. Repetitively speaking, your mind won't feel the need to remember something you know is already recorded when you establish this as a habit. It takes the work away from the brain. No need to commit a visual to long term memory when you think you've captured every aspect of it with 312 shots of one friggin' scene.

2. Odds are, you're never gonna go back and look at those pics. They'll stay on your SD card or computer hard drive. And there's a stronger propensity that nobody else is going to want to look at those pics even if you did pull them out. Think about it. NOBODY CARES! Who wants to sit and mull through all 1,538 of your vacation photos. After a while, even you'll get tired of the 11th image of the same scene and start fast forwarding through to find the good ones. And if you look like you're bored, why should anybody else sit through them.

"It’s not the daily increase but daily decrease. Hack away at the unessential."
–Bruce Lee

Here is one more reason why you won't remember so well and why the camera can be a distraction. When the camera comes between you and a memory, think about why you actually see versus what the camera sees. When you take in a moment without the camera, you have almost a 180 hemisphere of sight in front of you. Not only that, but ALL of your senses can become engaged in that moment. You remember the aroma of the honeysuckle that has completely engulfed the fence that your kids are playing in a mud puddle by. You can hear the low hum of all the bees and wonder if you should have the kids play elsewhere, but rationalize that you are being over-protective until the youngest one grabs a bee and is stung.


All that makes for a story and engraves that memory in your brain forever. You are totally engrossed in that moment and are capturing information using all your senses. Now try to think of that same scene but now, close off all your senses except for your sight, because that's the only one you are paying attention to. Then take an empty paper towel roll and cut it in half. Now use each half to see through. Can you visualize that? How much information is actually being recorded to your brain? Not much! You've limited yourself to tunnel vision and sounds and smells have no relevancy any more.

And show some respect, like my friend Marci in a museum. Do you really need to take pics of someone else's art? Put the camera down. Use your eyes. Record it to your brain. Its not your responsibility to have something to show the next guy. Let them come to the museum on their own and experience it in person. Your job isn't to record and share with the world for sake of posterity. If anything, come back with a story! Tell that! Motivate others to visit that museum!

Shoot less. Otherwise you cheat yourself.

So, Instagram didn't like my last post. My profile on there does not exist anymore. Can't access my account. Nothing. Just gone. Well, that's their game and as a private entity, they have the right to do just that. And I have every right to say Fuck'em. They have 100% lost my respect, because respect would have been, "Hey we're sorry you feel this way. What can we do to help make your Instagram experience better?" At that point, we can still talk and I get to feel like a citizen consumer of their product. And if we don't reach a conclusive mutual agreement, then OK. Part and go separate ways. No harm. No foul. 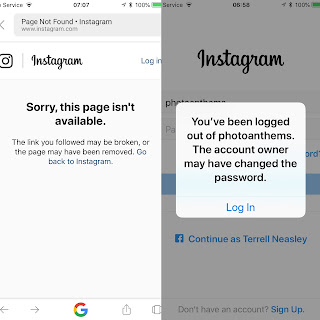 But that's not what they did. I was dictated to without the ability to question a thing or even get clarification to better understand. Shadow Banning my images isn't in their Community Guidelines either. I can't work with anybody like that and simply won't. For the future, I'll move on without Instagram in my life and I'm absolutely cool with that. I still have my goals and I will achieve them in a different manner. I'm just getting off that platform earlier than expected. This will give me time to research my options more thoroughly, so I'm good with having that bridge burned.


Yeah, so I ordered my laptop yesterday. Going with the $2300, 15.6" Gigabyte Aero 15X, with the 6-core i7-8750 processor, 16GB of RAM, half a TB of NVMe SSD, Nvidia GTX 1070 GPU, and a 1080p display. I wanted to wait another week or two for it, but inventory everywhere is low. Other versions/variations of this laptop model suddenly were not available any longer so when I saw this one with a much sooner date of arrival, I jumped. The 15X is the middle version of this model. There's a 15W for $2000 which is the one I wanted. Its the exact specs of the 15X only with a GTX 1060 graphics card. No date on when it gets in...only "soon". Then there's the 15X, but with a 4k display for $2500...mid-July expected delivery for that one. Nope...had to jump on what was available. If the 4k version was what was available, I'd have pulled the trigger on that one.


The MS Surface Book 2 was less power but still more money. It was a whole grand more money for a lesser processor AND lessor GPU. I didn't need the removable screen. I hated the fulcrum hinge and I just couldn't see that it was a better deal. Its hard to believe the Surface is charging a thousand dollars more...and for what? If it was worth it, I could see it. Maybe it is for you, you should check it out. I need a laptop to edit photos and videos on and I think the Gigabyte Aero 15X best suited my needs.

Now we'll see after I get my hands on it as to whether it was a good decision or not, but I feel good about it. But that won't be for a while yet. I'll definitely be doing a review on it, but I won't have it til sometime late June. Then I'll load it up with my much needed software and get to work. Adobe for sure will get loaded, but what else? I used a ton of plug-ins on my desktop and I'm not looking for the same 'ol, same ol'. Its been years and I'd love to change it up a bit. Capture One, maybe...? I love the fact that its easily upgradeble, but I'll wait til around Christmas to add another 16GB of RAM (2 slots for max 32GB) and another 2TB SSD for a total of 2.5TBs, since there's one more slot for another SSD.

And with that, Papa's gotta get a brand new bag. My current Thinktank Retrospective 30 won't hold a 15.6" laptop. So I'm going with the biggest messenger shoulder bag that gets the job done. I don't need anything that looks like I got a boat load of cameras in it, so I'm sticking with Thinktank again and getting the Urban Disguise 60 v3.0. I'll be doing a review on it as well when I pick it up at B&C Camera in Las Vegas. This along with the Sennheiser AVX and the Osmo Plus will be my main purchases for now. Waiting til the end of the year will be the Mavik Air. Gotta pace myself! The only thing that is also still questionable is the Sigma 20mm f/1.4 E-Mount for Sony lens. There is still no word yet on if it will be available and in stores during my visit back stateside.


Brought to you by Photo Anthems.com No comments: