***Special Note: This post is commentary only. These shots were not made with the GFX100.***
"The chief enemy of creativity is ‘good’ sense."
~ Pablo Picasso

Fujifilm has just announced a new camera, the GFX100. This is a medium format 100 megapixel camera. ONE. HUNDRED. MEGAPIXEL! (Actually, it's 102MP) Oh, and it's $10,000... just for the body. No lens. Of course this begs the two-part question of "Who needs a hundred MP's?" and "Why pay Ten Thousand friggin' dollars for a camera. That's a very good question, so lets get into it.

There are already 100 megapixel medium format cameras out there. Hasselblad and Phase One are already out there since a few years now. You'll spend $30 to $50k on these systems...body only! I can't say this with a high degree of certainty, but I don't see the dslr/mirrorless pro photographer demographic making a bee-line to these systems. Nope, I'm gonna guess this market is for current medium format high end users with the scratch to purchase personally, purchase via a company account, or lease/rent these bad boys. That means a limited and small market base.

This is where Fujifilm makes a drastically different game-change on TWO fronts. The first, of course is price point. Coming in for just $10K, (I laugh when I say JUST $10K, of course), you can get into this high end medium format market for a fraction of the current costs. Drop another $5K and you got yourself probably 3 good lenses. If I were to jump into this, it'd be the 23mm f/4 and the 63mm f/2.8. That would set me back about $3k, so for a $13K total, I'm in with what I need. For another $2K, I could pick up the 32-64mm f/4 zoom and be golden. So this price point might be a tad steep, I'll grant you, but it is much less hefty than dropping $30K on a single system and lens.

The other part to this is the fact that Fujifilm made the GFX100 to be emphatically similar to the Canon 1DX or a Nikon D5. What this means is that they made the thing to FEEL like a dslr/mirrorless full frame camera. Not only that, it also FUNCTIONS like a full frame camera. Going from FF to Medium Format would be like going from a Chevy sedan to a dump truck. Works the same, but TOTALLY different feel.


The GFX100 is actually just a little bit smaller in size and weight as a Canon flagship camera. It has the integrated battery grip and supports 2 batteries. Like a full frame mirrorless, the GFX100 is the first medium format to have phase detect auto focus (3.7 million points over the whole sensor. Not even sure I understand that.) AND in-body stabilization that gives you a 5-stop assist for those slow shutter speeds. Unlike most of today's digital medium format cameras that give you 1 shot per second, the GFX100 can shoot at 5 frames per second. What makes that unique is the fact that this high megapixel count puts out a ton of information with each shot. So Fuji has coupled this back-side illuminated sensor (made by Sony) with a Fujifilm X-Processor 4 engine to process that info in record speed.


"The greater the artist, the greater the doubt. Perfect confidence is granted to the less talented as a consolation prize."
~ Robert Hughes

Here's one more target market reminiscent of the dslr/mirrorless similarity. Have you ever heard of anybody doing video with a medium format camera? I haven't. I haven't seen a single soul have their go-to system for video be a medium format anything. I think that changes with the GFX100. It will shoot 4k video. That's 30p... INTERNAL. You can do 4:2:0 internal OR output at 4:2:2 all at 400mbs. Damn. Oh, it also comes with F-log if you want to flatten everything out and color correct later. And of course, it has a mic and headphone jack. I can see somebody wanting to do some high end video production with this. I'd like to see what down sampling would look like.


So yeah. I think there are definitely some opportunities with this. I was not on board with the GFX50s series. I did not see a noticeable viable improvement over my Sony A7r2. It was still too much of a medium format system that I haven't adapted to. But this GFX100...? I won't lie. I want to see what my nudes look like under this. I wish it was out for me to take to Patagonia in a few months and see what I can do with some mountain/landscapes or some portraiture. Will the 23mm still let me do Astro photography at f/4? And is it too bulky for me to travel with? Those are the only two points I have that give me pause. Deal-breakers, though? I think not. Hell, I'd figure out a way to carry it. Admittedly, I drooled a little bit. Nudes and mountains at 100 megapixels... Hmmm...

Dang...I forgot. I'd need two systems. I'm not backpacking around the world with one camera. Maybe that Rangefinder body-style GFX50r would be up to par.

Here's what it comes down to.

Do you need it? Good question. It all comes down to two things. ONE, if you are making money and can justify the expenditure, meaning you KNOW you will make your money back this year, then why not do it? I'd talk bad about you if you retorted with memory space issues. The hell with that. Get the friggin' camera.


Second... Let's say you are not a professional. You know you will not make your money back on the camera and it's just another hobby expense. Take a look at your current system. If it's a crop sensor or consumer end full frame that you got used, then just enjoy my pics here and I hope you are entertained. But if you are a hobbyist with a D850 or A7R3 with enough lenses to start your own camera store, Get the damn Fuji. Why would you not want to produce the best possible images you can make? For marginal upgrades, yeah. Sit tight. But for THIS? If you can pay $3k for a camera, you can do $10K, so quit trippin'.

Will I get it? Prob not right this second. Availability won't be til end of June. I will not be stateside to purchase one. Towards the end of the year, though...I'm going to be making some decisions. Hopefully, the camera pans out and lives up to all the hype. If so, B&C Camera, Here I COME!!

Check out these links for more reviews and info:
Fujifilm’s GFX 100 is a medium format camera that performs like a mirrorless
Fuji GFX 100 Hands-On First Look YouTube
PROJECT REAL: Michael Clark x GFX100 / FUJIFILM YouTube
Here’s the First Timelapse Shot on the 102-Megapixel Fujifilm GFX100
Brought to you by Photo Anthems.com No comments:

As a traveler, I tend to do hella shopping at REI. They are my favorite store, but I go there often for a reason. These guys take care of customers and they take care of employees. More on that at another time. For now, I wanted to touch on one of the brands they stock of which I am a big fan. That would be Osprey.

I bought my Midnight Blue Osprey Aether 70 backpack in 2012 for my first trip to Central America. Well, my first time as a civilian, anyway. In any case, a backpack to a guy can be a very personal, dare I say intimate, and very necessary travel accessory. You can't just let someone else pick it out for you and give it to you as a gift. It's the same thing as a camera bag for photographers or purses for some women. So yeah... Quite personal.

You saw plenty of my adventures with that pack on my back or by my side. It's taken the abuse of hard travel, too. About 4 years ago, it fell off the top of a shuttle van doing 80 down a El Salvadoran highway. Later on, airport security, I can't recall where, cut the waist straps off of it. I assume it got caught on a conveyor belt or something. And just before this past New Year's, it got soaked in shrimp juice in the cargo hold of a bus in Ecuador.

Osprey has an Almighty Guarantee that says they'll repair or replace your bag. I asked about it when I got back stateside last month. They scanned my membership card, checked my account, tracked my purchase receipt, and told me to go pick out a bag, as my Midnight Blue Osprey Aether 70 was beyond repair. Yeah, I picked out a new bag real quick. THEN dude, told me I get a $5.87 credit back to my card. I was all excited to get a new bag. UNTIL the guy also told me I had to hand over my original backpack.

I handed it to him. He grabbed hold to take it, but I didn't let go. He tried to pull again. I still didn't let go. The understanding cashier must have experienced this before. He saw my anxiety and gave me a moment, before explaining that the exchange required him to take the old backpack. I understood. I did. Letting go was still hard, but I eventually opened my fingers and released the pack. It didn't occur to me to get pics. I didn't think to even ask if it was going to a good home. But much like my recent post about the transient nature of travel friends, it still sucks saying good-bye. 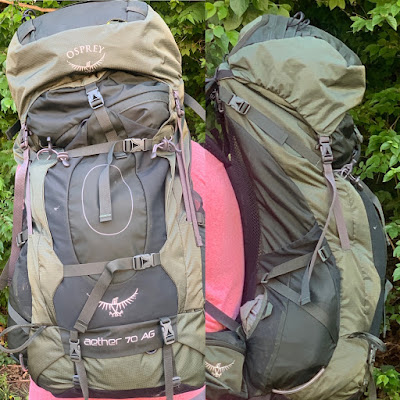 So now I have a brand new Adirondack Green Osprey Aether 70. I still chose to go with this style of backpack. It suits me and they have made some upgrades. Some of which I am still getting used to. The top lid actually detaches like the old one, but instead of converting to a fanny pack, the new one has straps and becomes a day pack backpack. I'm going to have to spend some more time with it on my back before I can say whether the new Anti-Gravity tech feels better on my back than the former Airscape design. I can, however say that the new waist-strap is much more stiffer and is supposed to better provide a custom mold to you once you get it on and spend some time with it. All in all, I really like the pack. I have a good feel for it and I expect some great adventures with it.