This post should probably be titled, "Five Things *I* Didn't Know About Hanoi". I have been here exactly one year as of this month. In this time, I have come to have a deep appreciation for this country, it's culture, and it's people. I have been exposed to so many different traditions and ideas, but I decided to do a post about 5 particular things I found to be quite astonishing about this city in Vietnam.

So here are FIVE things I found out after arriving:

1. Colombia isn't the only Coffee Mecca. Yep, Vietnam, too!

Okay, this one is more about Vietnam as a country than Hanoi, but it was still a huge shocker to me to learn this. Brazil is actually, the biggest exporter of coffee, but most everyone is familiar with Colombian coffee. No. 2 behind Brazil is, you guessed it... VIETNAM! Check out this article on it... => History of Vietnamese Coffee. I have NOT tried Egg Coffee just yet, and I still drink hella Americano. That's primarily because I still prefer larger quantities of coffee than just a swallow in a shot glass.

2. Long Bien Bridge was built by the same company that made the Eiffel Tower.

It is a common misconception that Gustave Eiffel designed the bridge, but this is not true. The same company... yes. Daydé & Pillé of Paris designed and built it, but Eiffel was not involved. Long Bien bridge opened in 1902 at almost 2300 meters long after about 3 years of construction. It spans the Red River and was bombed 14 different times during the war. It is no longer used for automobile traffic today. Only trains, bikes, and pedestrians cross this bridge now. 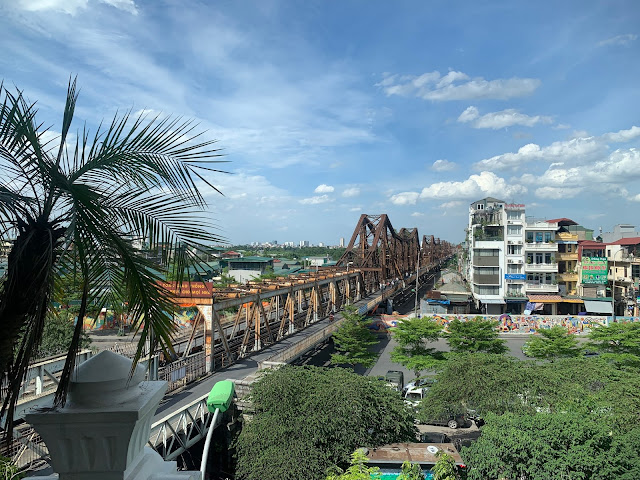 3. John McCain has a memorial next to the lake he fell into after being shot down.

This one was sort of huge for me. I had just visit the War Museum a day or two before visiting the McCain Memorial. As an Army Veteran, I grew up trained by Vietnam war vets. When I enlisted, I was issued the same gear they used in Vietnam. I saw the PRC-77 radio I used in that museum, along with the same M113 armored personnel carriers I drove. My jungle boots were in a display case there. It was eerie.

I visited there with my British friend Richard and his Vietnamese girlfriend, Trang. After leaving the museum, he told me about the John McCain Memorial site. I passed by it at least once a week and never knew it was there. It was nearby and I visited it the next day. I wasn't sure how to think of it. The late Senator and former POW returned to Vietnam several times in his effort to strengthen Vietnam/US relations. In 2009 he visited the memorial. To me, the statue depicts a defeated, kneeling figure. I saw it as more celebratory that he was caught than honoring the improved relations, but I could be wrong in that. 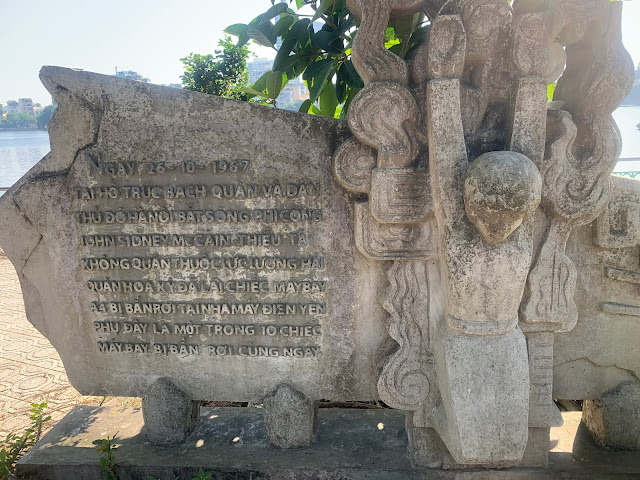 4. The Lotus Flower is not just for decoration!

The aquatic pink lotus flower is the national flower of Vietnam, but it is more than something pretty to gaze upon. I had no idea, but it is also an edible plant. The flower, the stem, the seeds, and the roots have all been part of a cuisine or recipe ingredient. A lady on a plane gave me a seed pod and I ate the seeds incorrectly at first. I didn't peel off the green casing around the seed. I had downed about 5 of them before she corrected me. But after getting down to the actual white nut underneath, it was quite good. I haven't had lotus flower any other way beyond that, however.

5. The Coronavirus has been checked better than most any other country in the world!

Make no mistake. Vietnam has been on top of this Covid situation since DAY 1. From the very first infected citizen, they took measures to protect it's densely packed 100 million population. Aggressive quarantine and contact tracing has kept case and death numbers down better than almost anywhere else in the world. A new wave recently brought us to just over 2400 cases. Not 24 Thousand... 24 HUNDRED. There have been a total of 35 deaths that all occurred during the second wave back in July/August 2020. The preventative measures have been exemplary. The country remains on a new entry visa lockdown, but we are free to travel within the country. International flights have been allowed in under the most strict circumstances... none of which is for tourism.