"My creative process begins when I get out with the camera and interact with the world. A camera is truly a license to explore. There are no uninteresting things. There are just uninterested people."
- Jerry Uelsmann
"All eyes can see 'how a country can be free and treat the naked body as art. Not as pornography or as a crime, but with happiness and caring.” - Spencer Tunick 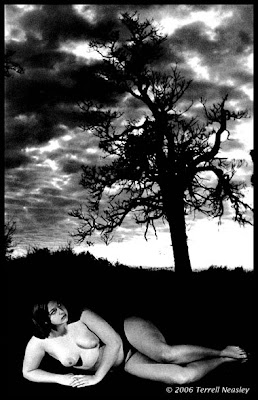 Today, I am going to cover some of my inspirations. I've recently posted about Iris Dassault, Dave Rudin, and Chris St. James, who by the way, just posted a piece on me for Univers d'Artistes that made me all bashful inside. So those guys, notwithstanding, I wanted to also post on some of my original inspirations that had a lot to do with me doing photo work and artistic nudes, in specific.


As far back as I can recollect, I've had a fascination with the female form. It wasn't until my military tour in Germany, however, that I was freed from the mindset which prevented me from separating the idea or concept of the nude with the notion that sex had to be implied. This then brought on a new and more liberating appreciation for the female nude, unencumbered by the notion of lust. Next came the introduction of Spencer Tunick, via his HBO special, "Naked States". He is best known for his installations of using thousands of nudes in a single photographic work. Prior to this, I had no creative outlet for my appreciation of the nude because everything that I saw that depicted the nude form was either in a museum or associated with the adult industry in some fashion. Photographic artistic nudes just did not exist to me before Spencer Tunick, who followed the original HBO special with his next one, "Naked World". I admired his sense of dedication to his artwork at the risk of his own freedom. There was one point where the cops in NY were waiting on him to release the shutter on a nude model. He gave quick instruction to his assistants on what to do while he was away in jail, took the shot, and was immediately hauled off. Good thing he had a good attorney. 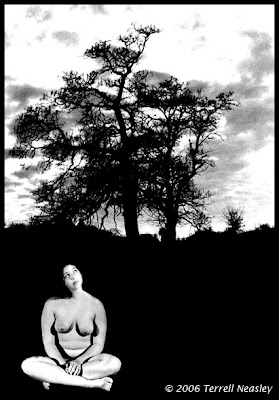 That was my outlet. I wanted to see more. Who else could be doing this? The answer to that question brought me to Edward Weston. There is not another photog that I identified with more than Weston, but I have already given him several mentions on this blog. You can do a search on his name in the search box for this blog. This allows me to get to my next inspiration, Jerry Uelsmann. If Spencer was responsible for my interest, Uelsmann was responsible for my commitment to it. I shoot digital now, but I was a film purist up til right at a year ago. I was seeking my place in film and wondering what was the next step. I wanted to see something different and I wanted to do something different, but I thought I had already reached the limits of what could be done in film.

"For me to walk around the block where I live could take 5 minutes. But when I have a camera, it could take five hours." - Jerry Uelsmann

Over one Christmas break, a few years ago. I studied photography day in and day out, particularly darkroom explorations. It was while I was looking through an interesting photo book of digital artwork in the library that my commitment to photography solidified. Paging through the book, I saw interesting photos, but I knew that digital manipulation did not appeal to me. I felt the creative process was somewhat diminished with the addition of computer-based filters and processes. The thought crossed my mind that if there was a way to do this with film, that would be totally magical. As I lifted the book to return it to its proper place on the shelf, the word "darkroom" on the back cover caught my eye. I retrieved the book once more to peruse the book's back cover summary and to my utter amazement, read that all these images were done using ONLY darkroom manipulations through mulit-negative exposures! The creator...Jerry Uelsmann. I couldn't breathe, I tell you. When I began to see what was actually possible IN the darkroom, IN film, IN photography, I knew that my creative outlet could be boundless. I was released to explore again. At that moment, photography became more than a hobby or a past time. It was my thing.

"I just create shapes and forms with human bodies. Its an abstraction, its a performance, its an installation." - Spencer Tunick 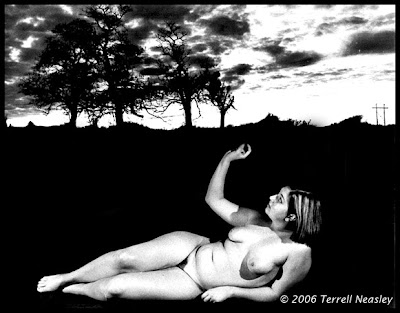 Jerry Uelsmann would utilize more than 8 enlargers each set with adifferent masked negative while moving the paper around to each enlarger and only exposing a portion of the paper to that particular negative. Those of you familiar with darkroom prints know how challenging it can be with one negative to obtain a good test exposure and working print before even beginning to create the final print. I found this page with a kind of video clip on how he actually creates a masterpiece with his unique process. Just click on the IN THE DARKROOM tab when you open the page. You can check out books by him via this Amazon Link.


These images are of my original attempt at multi-negative exposures and I only used TWO enlargers, combining the image of Katie taken in a studio against a black background, and landscape images taken while scouting weeks before. Take my word for it when I say creating these images were exasperating...but exhilarating!
Brought to you by Photo Anthems.com