Ode to Faerie AND What Comes Next

"A muse comes down from Mount Olympus and changes my attitude, cheering me up - it's an inner intuition, suddenly giving a breakthrough to be able to move ahead."
~Robert Bateman

Man. Yesterday was my country's Independence Day. In all my years, never has there been one this... somber and impotent. I don't know a damn thing right now worth celebrating. Divisions across the country extend beyond the pugilistic politics and has invaded neighbors, friends, and even family. Racial tensions are on the rise like it was back in 1968. People find it difficult to say simply that Black Lives Matter, because somehow that notion has been turned into a peculiarly negative phrase. Even if that were the belief, shit... change it around. For instance, I could still respect a white person saying,

"I don't fully understand, 'Black Lives Matter', but I will say that I believe that the lives of Black people are just as important as anybody else's in this country and should be afforded the same equality as I would expect for myself!"


Instead... Nope, all we get is "ALL lives matter". No clarification, no elaboration... just a period after MATTER. Somehow, I would have thought that a country that values INDEPENDENCE so much would be the last of any people in the world that would rob those same liberties it fought so desperately for from another human being or group of people. The US, if it were true to that Declaration of Independence, should be the poster nation of countries that refuse to let anything resembling slavery or inequality from every being part of its historical record. In Germany, you can't spout out Nazi rhetoric and not expect to go to jail. Yet we give neo nazi, white supremacists, white nationalists, and the KKK, a major platforms to voice their hate.


"If there be an object truly ridiculous in nature, it is an American patriot, signing resolutions of independency with the one hand, and with the other brandishing a whip over his affrighted slaves."
~ Thomas Day, British Abolitionist, 1776 after the publication of the US Declaration of Independence


In the midst of a pandemic, the United States still remains oblivious to what the country is suffering, compared to the rest of the world. I don't know of another democratic country this wealthy still trending skywards with almost 3 million infections and 130,000 dead, with 50,000 new cases a day and 40 million unemployed... with an administration that thinks it's doing a good job.

Comparatively, Vietnam sits right next to China with one-third the population of the U.S. (and much more densely populated), has 355 TOTAL cases and ZERO DEATHS from Covid-19. In case that didn't make sense, I'll say it another way, because it is work the repetition. NO ONE HAS DIED FROM COVID-19 IN VIETNAM. Only 271 of those were community spread. The rest were repatriated citizens who were infected in other countries. As of two days ago, only 15 active cases remain in the country of 100 million. Do you see what I am saying. That means 130,000 people did not have to die. 3 million people did not have to get infected. Argue about masks, all you want. Vietnam is back to normal now as a country with only one exception... no new tourists. Outside of that, business is back and the economy is already trending upwards. Go ahead and check it out for yourself! You got Google. Argue about Dr. Fauci as you like. Vietnam did the SAME THING this dude has been trying to tell the powers that be in the US. Whatever argument you want to make, the fact remains that there are Americans that are dead right now that didn't have to die. Texas is trending high as a MF right now and that bothers the shit out of me. Most of my family and everybody I know is there.


What's the difference, you ask? It's simple. Vietnam took this pandemic seriously before it was even called a pandemic. They had everyone wear masks, which the citizens did gladly. They didn't have a bunch of test kits to start with so they used quarantines and contact tracing. If you tested positive, they wanted to know everyone you were in contact with and then they monitored those people or put them in quarantine, just in case. I watched it all play out. I was connected to Patient 237, from Sweden. I had to go into quarantine, myself and was glad to do it. Scary? Hell, yes. I'm here alone and I knew of no other tourists who had decided to stay like I did.

Of course, as per my last blog post, I learned that there are yet a few more who did. I am not as alone as I thought. Nonetheless, I was happy to do as I was told. I could only communicate with the people around me and I had questions EVERY SINGLE DAY! These Vietnamese locals told me flat out that they were afraid, but that they had faith in the government and it was part of their culture to pull together as a country and do their part. If the government says wear masks, but the citizens refuse to do it, we fail and everyone gets sick. If we don't have good leadership, we fail and everyone gets sick. And that usually followed a story about pride in the country and achievements they've made to justify it.


There were no protests of rights violation. It's a fuckin' mask. How's that any different from a seat belt, or a helmet if you drive a motorcycle? There were no mixed messages here. Nobody listened to 5G conspiracy theories . There were no armed rioters at the capitol building. There was no run on toilet paper or hand sanitizer. Everything was done lo-tech in the beginning. There was trust in the government. Why? Because Vietnam has experience in this. When SARS broke out globally, Vietnam was the first country in the world to eradicate it back in 2003, I think it was. They didn't foolishly ignore the country's infectious disease plan because the previous administration designed it. They don't have the monetary or medical resources they have in the U.S. It would be devastating if they lose control in a pandemic.

Vietnam lost big money on tourism which is about 8% of it's GDP... about $7 billion from January to April. Well, they made up for it making three times that selling masks, PPE, ventilators, etc. to the US, Europe, and the rest of the world. They didn't need everything they made! What's the biggest take-away from that? They did not hesitate to kill off a viable money-making part of their national income for the sake of public health. There was NO hesitation. No argument over the economy. No considerations of what it might do to the leaders politically. No weaponizing a friggin' pandemic or dividing up a country. Just LEADERSHIP!


So where does that put me? I'm a traveler trying to backpack around the world. Frankly, I do not know. Many countries are handling things so differently and it all changes every day. But this is one thing I know. Because of the way the U.S. has mismanaged this health crisis, I can't come home and expect to leave again. I've been traveling for 2 years like this and have gone back Stateside 4 times, I think. I return, stay a month or two, and then leave again.

I can't do that anymore. My US passport is almost worthless right now. The US is the presently the pariah and scourge of the world when it comes to travel. You either can't get in or if you do, you must quarantine for two weeks. But even around here, people see me for the first time and I get the inevitable question. "Are you from the US? How did you get here? WHEN did you get here?" They fear me until I tell them I've been here since February. I can't imagine trying to get into another country right now. If I return to the US, I won't be able to leave. So I'm trying to get a year long visa here in Vietnam. I'll be content and incredibly grateful to explore this country for a year while this thing settles, and then resume my travels thereafter.

In the meantime, I needed something to pick my spirits up and few things do that quite like a nude model. The other day I came across one of my favorite models that helped guide me and develop my craft. As a muse, she's untouchable. I had the privilege of meeting and photographing Art Model Faerie early on as a beginning art nude photographer. Not long after moving to Las Vegas, I had her in my viewfinder honing my skills and improving my craft. She let me practice, experiment, and try out different ideas, techniques, and even bad attempts at art with never a discouraging word. She just kept coming back and offering to help some more. Trust me. Everything did not always go as I planned. Sometimes, I tried some things and they failed. She still came back.


Life got too busy. We both began traveling a lot in different directions. I was going outside the country and she was going across the country. I wish I had tracked her down and followed her to shoot her some more. Yes, that sounded a tad bit creepy but not if you know our world. Aside from how pretty she is and how easy she is to shoot, she's got those smiley eyes that make you smile even if you don't get the joke.

For several years, she worked with me for impromptu shoots and modeled for my Las Vegas Art Model's group as a model for both photography and life drawing classes. It's cool just being around her which is why I sometimes went over just to hang out with her family in the back yard around the fire pit. Yeah... those are good times I need to think about right now. Thank you, Faerie! 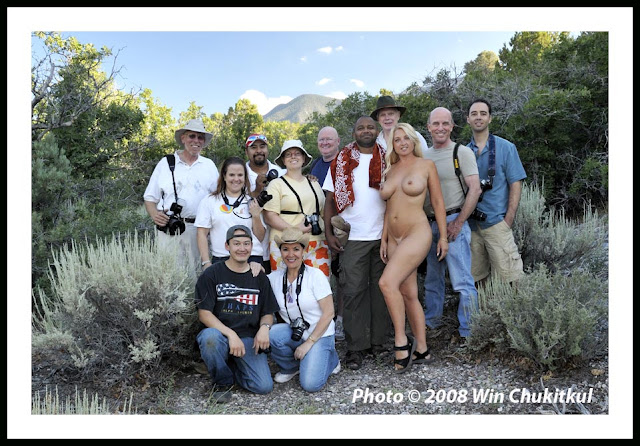