“In three words I can sum up everything I've learned about life: it goes on.”
― Robert Frost

For about two weeks or so, I've been going nuts looking for my navy blue "Life Is Good" hat. Chances are, if you've seen me on the street, I'm wearing that hat and my government issued dog tags. I'm used to having my head covered from as long as I can remember and it drives me absolutely nuts when I lose a hat. I will wear out a hat or lose it before I move on. I've finally recovered it when I got invited over to my bud Chris' house to watch a UFC fight. Just as I stepped in the door, he handed me back my hat that I had inadvertently left there from a few weeks back when we were watching one of the NCAA Men's Basketball Final Four match-ups.

Getting it back made me stop for a second to contemplate the sense of relief I was feeling to an object of clothing. Yeah, everybody's got that favorite shirt, lucky tie, or sentimental article of attire, but I can't necessarily articulate why the hat had become so special. I can understand some of my previous head gear favorites. I had a Kangol my brother gave me once. I lost a Dallas Cowboy hat who used to be my favorite NFL team. I was pissed when my girlfriend's dog at my Murray State University hat while I was still in college.

I had no such history with this hat. It wasn't even my first Life Is Good brand hat. I had my first one for only a few days when it blew off my head in strong winds while I was trying to get a shot of a busted-up pier along the Gulf Coast. It blew off into the water. I had hoped it would float back to shore but instead it just skirted about 30 feet off the shore-line for a good 300 yards before I lost site of it. Had it not already been after dark and had I not been alone, I would have left my shoes and cell phone on the shore and gone after it. But I felt I would have been stupid to go into unfamiliar waters by myself in the dark. I still came back the next day and walked the shore line for a good mile before giving up.

"If you love life, don't waste time, for time is what life is made up of."
- Bruce Lee 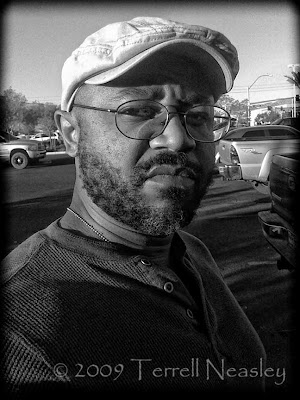 This hat held no such memories, but retained value nonetheless. The closest answer to my self-directed question may just be the brand: Life Is Good. Because it is. It can be crappy and downright seemingly unfair at times, but life is good. No matter how shitty it might be for you at the moment, you are alive and that means there's a chance of hope. There is no hopelessness as long as you draw breath. People have searched for the meaning of life since recorded history. Scientists today are searching tirelessly throughout the visible universe to find other evidence of life. Governments all over spend billions upon billions in an effort to hunt for planets like the Earth looking for possibilities of potential life.

They have found nothing of the sort. As far as we can see, light-years into our galaxy and beyond, we...right here on this tiny speck of dust, are the only life-forms in existence. There are 6 billion people on this planet. There are likely 60 billion more different forms of life for every person. Yet here we stand, bent on killing ourselves and our own planet via wars, crime, pollution, global warming, etc. I just don't understand why we have to be mean to one another despite having differences. As far as we know, we are all we have. Despite our multitudes here on Earth, we are a rarity in the universe. Life is not cheap. Life is Good.

"O! for a muse of fire, that would ascend the brightest heaven of invention..."
- William Shakespeare, Henry V Act I, Prologue

I'm still working several endeavors at once right now, but I'm glad to say I'm still on top of my original plan to go big on my nude work. As I mentioned before, last year, I only shot 4 models and only 7 the year before that. I'm not sure what my count is up to just yet, because some of those fell through even after I did the work. But I can still say I'm having fun with it. I've recently had the opportunity to work with two friends of mine that have been at least two years in the making. Its been one of those planned-on things, that just never got done. Until now...


I initially wanted to shoot 20 models for the year. Not quite sure how I'm going to make that goal. I'll be traveling for a considerable chunk of the latter half of the year. I hope to do some on the road, but who can tell how many? I'm a quality over quantity kind of guy anyway. But then there are those times when I start to do more work with fewer models. When you begin to gel with who you're currently working with, its easy to forgo finding new talent. That's a strong tendency of mine, and with Emma and Alethea, I've got catch-up work to do! Like I said, we've been trying to hook up for the last two years. I love these girls and they have been a tremendous blessing to have around and call friends.

And it was a good session to say the least, especially after overcoming the fact that the initial site, which the primary concept hinged on, was no longer available to us. We still worked some secondary and even tertiary sites that still afforded us excellent possibilities. And while we were able to turn out superb images on our debut photo session, I suspect the next one will be even better. Yeah, I like putting that kind of pressure on myself.

“You can only use someone for so long before you dry them out. How long does a muse last? When do you let them loose?”
― Coco J. Ginger   (Good question...)


Another thing that makes having a great muse or two fun is having the opportunity to just PRACTICE. As glorifying and romantic as you might think it happens, artists rarely have an epiphany or dream concept that comes to them in the night and then they perfect it first time. Its more often a vague idea, that gets tossed around, experimented with, and trashed long before it comes to fruition, much less gets perfected. A good muse will allow you to work through those processes to hone your craft, refine your concepts, polish your skill set, help cultivate new ideas when original ones don't work.

I'm looking forward to the next series of projects I have planned for these girls both together again as well as individually. They are strong together and I can also benefit from their work independently. My aim is to maximize the potential I see in them by challenging my ability to conceptualize thus optimizing the potential in myself. That may sound corny, but anyhoo...that's the goal. I'm just glad I get to work with these girls.

Return of the Panda

“It is good to have an end to journey toward; but it is the journey that matters, in the end.”
― Ernest Hemingway


Seems like every now and again, I get tied up in a bunch of things and miss my regular blog posts. I'm playing catch-up with a bunch of things right now, including edits from previous shoots/projects and some online classes I'm doing. My nude work is back up, at least. I've had some setbacks with some of the use of my work, but I've had some very satisfying gigs that have resulted in outstanding work. One of those projects is getting back to work with your fave model, Panda!

Where's she been? Having kids! Well, one anyway. The girl's been busy so I hadn't gotten to shoot with her in a year or so. I've missed her, but she's the same girl with a few different priorities and I'm glad to have her. We got to shoot a few weeks ago and I got my first chance to meet Baby Panda, who's a cutie in her own right. But its still kinda funny. Panda and I used to shoot late into the night before I would bring her back home. Now she's in bed before it's really that dark! So yeah, I gladly work with her new schedule.

I guess the biggest thing going on with me right now is prepping for my trip back to Central America. I'm planning on hitting that in July again, same as last year. It seems like only a few months ago since I was there last. Eleven months simply does not seem real. The goal this time is to spend a month with a Guatemalan family where I will learn Espanol. THEN, I'll begin my travels and hit more countries that I didn't get to make on the last visit. If you might recall, on my last trip, I spent a month in Guatemala and Belize with Heather Rae from In Search Of Squid. Ambergris Caye off the coast of Belize was the last visit before Heather Rae was to return home. My intentions were to stay and travel back to Guatemala and around Central America some more. How much longer...I had no idea.

“To travel is to live.”
― Hans Christian Andersen, The Fairy Tale of My Life: An Autobiography


However Hurricane Ernesto, (quarter million dollars in damage) had other ideas for us and forced us to evacuate the island. That's how I spent my birthday. With so few options, we basically had no choice but to run back to the States, buying return tickets only the night before. So I left Central America feeling incomplete and unfinished. I still need to figure out how to take a nude model along with me. If I get my desire, I'll be gone at least 4 months, but I really only need an accompanying model for maybe 2 or 3 weeks to hit about 6 return locations. These are spots that I promised myself I would return to with a model. So after those locations, I don't mind finding local talent or other willing travelers who wouldn't mind posing nude as I meander further South.

The plan now is to hit the remaining 5 countries and finish up in Panama. So that would include Honduras, Costa Rica, El Salvador, Nicaragua, and then Panama. Just depending on how things go, if it works, I'll even consider heading into South America. I would love visiting Columbia, Brazil, Peru, and Ecuador in particular. This will be on my own dime. Ideally, I'll find a gig that takes me down there. Or better yet!! I'll offer my services to another female client who needs a travel companion, does nudes, and is affluent enough to sustain a continuous travel status. I'd follow her all over the world taking her pictures any and everywhere. Now THAT would be ideal. I can only hope and pray!
Brought to you by Photo Anthems.com No comments: