How the Coronavirus Has Affected My RTW Backpacking Trip 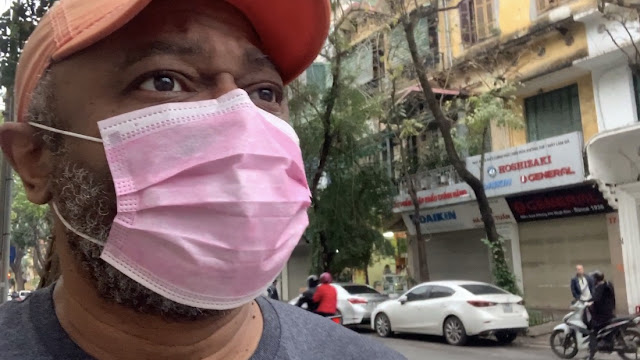 By far, this has been my strangest experience in any country I've visited. Not so much for the country itself, but because of this world pandemic that's locked up the planet. I think at some point I'm going to have to come back here and do this country all over again, because I know I'm missing the beauty I came here for.

As it turns out, however, I am really thinking I couldn't be in a better place, though. Honestly! Vietnam has been on top of this this Covid-19 Coronavirus since the beginning. They only had 17 confirmed positive cases as of early March and 16 of those were already treated, cured, and released from the hospital. They were almost able to declare Coronavirus-free. Then a couple of cases got through from someone traveling through Europe and in hardly 10 days, that rose to over 130. Comparatively, that's still quite a low number. 130 cases, 0 deaths. Today, I think that number is about 160. They do this by keeping the public informed with a solid government coordinated effort. No mixed messages. Then they test, test, and test. After that, they treat. So far, I've only seen them take decisive, definitive, and quick actions as a country. Europe has not done this. The US has not done this. Vietnam has deployed a relative low-tech approach.

"An Italian woman living in an area badly impacted by coronavirus admits: 'We expected other countries that are much closer to China to be in this situation before us so we just joked about it' " - Business Insider


I arrived in country on Feb 10th after getting my 3-month Visa in the mail a week or so before that. I exited the country via San Francisco and had a 9 hour wait until my next connection to Taiwan. For the first time in my life, I experienced the USO lounge I'm going to have to do another blog post on those guys because they made that half-day wait worth it!

I got to Vietnam a day earlier than my visa was for. They gave me a problem at first and told me I'd have to wait in the airport until tomorrow. I didn't even trip. I looked homeboy in the eyes and said, "Dude. I need to talk to your boss, if you can't work something." I had a driver waiting to take me to my hotel. It had been a long day... 26 hours of travel. I had no time for BS. Dude made it easy and just backdated my visa. Now I have to leave the country a day earlier than my visa says. Simple. I'll take that. It's still 90 days.

To take the fight to coronavirus, Vietnam instituted rigorous quarantine policies, and carried out complete tracing of all people who came in contact with the virus. These measures were implemented much earlier in the course of the epidemic than in China, where lockdowns of entire cities were used as a last resort to keep the virus from spreading further.


For a month, I stayed in the Canary Hanoi Hotel and got to know those people. They were initially bewildered because I didn't do a lot of sight-seeing or adventures. But I was doing just as I set out. I wanted a whole month on my ass in one spot, to let my knee heal up and rest. I'm still dealing with that Vincinguerra Glacier hike I did in Ushuaia, Argentina. I am literally conscious of every step I take.

After that month, I began to feel better. I booked a train ticket to Sa Pa, further up north by the border. I was looking to do some LEVEL hiking or at least minimal elevation. Yeah. No. The train stopped in Lao Cai, next to the border. Then I had a one-hour shuttle ride to my hotel in Sa Pa. That was an hour of  continuous elevation gain. And my hotel was at one of the highest points. So going ANYWHERE meant a straight down walk and back up again. It was like I was back in Ushuaia! But I was determined to get something. I needed this. I had spent a month in my hotel and I needed to shoot.

I was there for a week and I had 1 full day of no fog or cloud cover. Not cloud in the sky... cloud in your face. You could see maybe 30 feet before your vision became obscured. I thought I'd make the best of it anyway and picked a site on the map to hike to. A waterfall. Looked simple. I got maybe two miles, left the paved roads, and had just entered the trail between farmlands. I passed people tending their vegetables in the fields, in the mist. I got to the edge where it got really steep. It had rained the previous day, and in that mud... for a split second, I lost my footing. I didn't bust my ass! But in the process of arresting my fall, I did a little twist on that knee. It was reactionary. Couldn't help it.

So then I had to hump it back up that hill on that knee. Had to sit my butt down again. My plan was to tour 3 cities around the border. I had 4 more days until I would book a shuttle bus to Ha Giang for a week or so then one more trip to Cao Bang. Then Coronavirus came to Sa Pa. Two Germans brought it and infected some people in Cat Cat Village... not near me, thankfully. That was all she wrote! The local government shut down Sa Pa for quarantine. I got the notice at 11:30pm that I had to check out the next morning by 8am.


That was cool. It put me in a bind. But locals are becoming wary of foreigners. They petitioned the local gov't to do something. It took less than a day. So I was gratefully on a bus back to Hanoi, not really sure what was there either. I was hearing about so many closures. I did not want to continue on to Ha Giang and make people uncomfortable wondering if I was bringing infection to their village. So bowed out of that notion and returned to the place where at least somebody knows me... Canary Hanoi Hotel. They welcomed me back for a little more than a week. Then things changed there, too. Without foreign visitor reservations, they needed to shut it down. But they sent me out in grand style. They invited me to a party, made me the guest of honor and made me promise to return when they open in 30 days. I plan to do just that.

And then those good people connected me with their partner hotel, much bigger, more grand, and a room twice the size, but so far, I prefer Canary. I am here at Halais Hotel just around the corner. I'll do my month here and return to Canary. My visa is up May 10th. I will request an extension soon in another week or so for another 3 months, which will put me here until August. If I am fortunate to be allowed to stay, I'll do just about all that time right here in Hanoi. I'm not going anywhere if I don't have to. I want to stay as long as I can before trying to enter Cambodia. I'm cool with sitting right here, reading, writing, and keeping myself occupied. There is plenty of toilet paper and food everywhere. And it's definitely much cheaper staying here in Vietnam. Pray I get that extension!

I wear a mask when I go outside. Not because I think I need to, but rather to help make people comfortable being around me, serving me, or interacting with me for whatever reason that might be necessary. Today, a man saw me, he wasn't wearing a mask. I was just walking by and he immediately put a mask on and actively avoided me like a shy child hiding behind his mother's skirt. I just rolled my eyes, waved, and kept going.

I'm grateful that I am stable and safe, but I still feel for my family, peers, and countrymen back home and through out the States that have to scramble like they are in some Mad Max Zombie movie. Big-Ups and mad respect to those healthcare workers that stay the course fighting the hours while ill-equipped. The mailmen, the grocery store workers, and all those who are providing those essential services for $15 an hour. I'd better stop. That's not the subject matter I want to go deep on in this post.

A few nights ago, I set out at 2am just to go walk the streets. I was only gone for a hour. I walked a 2 and a half mile triangle though the city. I looked for alleys and there was one train track that went into this village section of the city. I think I got some decent shots. I enjoyed myself, despite getting scolded the next morning for not being safe. But I was cool. As of today, the Government of Hanoi or Vietnam... not sure which, has told everyone to stay inside for two weeks.

I'll keep you updated on my progress, efforts, and happenings. In the meantime, take care of yourselves. Wash your hands. Think about what you do and how it affects other people, but protect yourselves. There are assholes out and about right now.