"No one is useless in this world who lightens the burdens of another."
~ Charles Dickens

Altruism and Philanthropy are two concepts I want to ensure I incorporate into my life with everything I do. Along with, of course, being nice to people and treating others with respect the same way you should insist people treat you. I've tried to make it a point to pick up a cause and support it, but I've neglected this over the last two or three years, particularly since I've been gone on this journey. This is why I am choosing to begin my monthly support of the Cchocahuasi Animal Sanctuary.

I grew up learning about giving. Mama taught us about that in church. You gave during Sunday School and then at least twice during the morning worship. As an adult, I think the first time I actively gave a monthly donation to a cause was the United Negro College Fund as a soldier. As an artist, I donated my pay as a live nude model back to the Murry Art Guild, who hired me to pose. I also volunteered on Fridays to work at the reception desk and to fix their computers. I was a nude model for 12 years in total, but most of that time was with Austin Peay State University where I got my undergrad degree in Business.

But the last giving back project I did was volunteering my time for families for Now I Lay Me Down To Sleep. I did portrait artwork for families whose child was dying or may have been stillborn. I did everything at my expense and in most cases, I was able to do enough photography to make a photo book for the family all at my expense.

But I haven't had another Give Back cause that I felt led to help until late this past September when I accepted Athena Demos' invitation to accompany her to the Ccochahuasi Animal Sanctuary. I didn't think much of it at first. I didn't know what to think really. But let me set a few things straight. Two things, specifically. There is a difference between a ZOO and a SANCTUARY.

I am not particularly fond of zoos. I'm just not. But my point is not to bash zoos, here. I just want you to know the difference. The animals at this Sanctuary were not captured and brought here for your amusement to make money. These are animals that have been injured or abandoned and are how receiving humane care and rehabilitation. The people there are individuals who are animal lovers who care about the welfare of the animals in their keep. I got to see this first hand with my friend, Athena who volunteered there and was returning for a visit. So she has first-hand knowledge of this place. She didn't just donate her time and sweat-equity, but she put her money behind her dedication and commitment to this sanctuary.

I read several of the reviews and many people lauded the care and attention given to the animals there. However, there were also some reviews that were sprinkled in there accusing the sanctuary of being a zoo intimating that they never release these animals. And this is the second item I wanted to make clear. I got the chance to see the entire sanctuary and was introduced to the many habitats. I saw a hawk who I was told would never be released. It had one eye and permanent injuries. It would never make it out in the wild again. There are also animals who were abandoned at an early age and raised there that, as orphans, were never taught to survive on their own. They won't leave either.

However, some of these animals have treatable wounds, injuries, or illnesses that are actually released back into the wild. How do I know? As a photographer, I was invited to attend, film and photograph a condor release in the next two days and they were quite excited about it. I couldn't attend, unfortunately. I was leaving Cusco before then and could not make it back out there. But you can see the video on their => facebook page <=.

So, SANCTUARY... vs ZOO. There is a difference. And these guys depend on the donations and the entrance fees they get by inviting people to come out and visit. Part of what they have to do is showmanship. I read where some fool complained that they make the condors fly down over people's heads. Hell yeah, they do!! I got so see it multiple times! It was fascinating! What else are they supposed to do? They put on a show and then teach you something about them. I didn't know they were so friggin' BIG! And I didn't know they don't really fly, they soar! They soared down over our heads and landed. Then they WALKED back up to their habitats! If they do fly, it's for really short distances to "jump" more or less.


Right now, they are doing everything they can to have larger enclosures to make the animals more comfortable. I was there when they had just added on to a monkey habitat and then knocked a hole in the adjoining wall so they could enter the new place. I got to sit and talk with the guys who work there. It's not easy to come up with solutions. They are in Cusco and they told me about attempts to acquire solar panels to heat some of the enclosures when it gets cold during the winter. They are not just looking for money, but rather also donated items! But yes. It takes money to feed the animals. It takes money to build more and larger enclosures. And it takes money to provide medicine and vet care for the wounded and sick. This is a first-rate sanctuary. 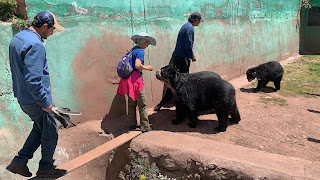 If you are in Peru, I most definitely recommend you take a flight to Cusco and visit Cchocohuasi Animal Sanctuary. And if you can't get there, then join me in helping them with your donation. Tell your friends who are looking at opportunities to go volunteer in Peru or they can donate as well. If you think what I'm doing is cool, Follow Athena Demos on her Instagram to keep up with her amazing adventures. She's a world traveler, as well and is documenting her journey as she goes.

Thank you for your generosity!